Sport and relaxation for your entire family

Mountain Villa Wander is in a great location: 100 m from the Jiz50 ski stadium (4 tenis courts in summer), 80 m from the entrance to the ski trail (Jizerska Magistrala). A children's rope park and nature public swimming pool is next to the house. The apartments are clean and new in Scandinavian style and provide good facilities for a pleasant and relaxing holiday with children. Villa Wander offers a total of 6 apartments with pleasant common areas and a sauna.

Scandinavian-style apartments with pictures of the Jizera Mountains

Two spacious rooms with kitchenette and bathroom for 3 to 5 people. Size approx. 40 m2. View directly on the children's ski slope or the Bedřichov valley. 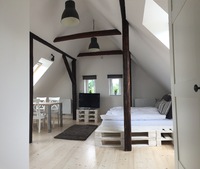 Attic apartment is a large room with an enormous bed of 210 cm, a kitchenette and a dining table for 3 people, a separate bathroom. The size is 32 m2.

Two rooms with kitchenette, corridor and bathroom for 2 to 4 people. Size 38 m2. Overlooking the Bedřichov Valley.

Part of the facilities is a lounge and a sauna with a relaxing room. There is also a bar for Villa Wander guests.

Who was the WANDER family 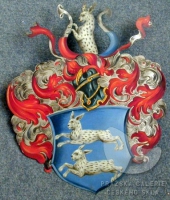 The name of the mountain villa is a reminder of the WANDER glass family, like us, went to a new project and tried to create something new for joy and comfort.

At the end of the 16th century, Bedrichov was covered with extensive forests. In 1598, Peter Wander, a "knowledgeable glass man", presented to Melnior of Redern a request to the owner of the Liberec estate to allow him to establish a business where "translucent boards might produce". His request was met, and so there was a large glass factory. Around it soon came the whole village that it received, apparently in memory of Melchior's father Bedrich I (Friedrich) of Redern, the name of Bedrichov. The glassworks were in operation for 209 years, and the Wander family founded another glass factory in the county.

We look forward to your visit

We use cookies to enable the proper functioning and security of our website, and to offer you the best possible user experience.